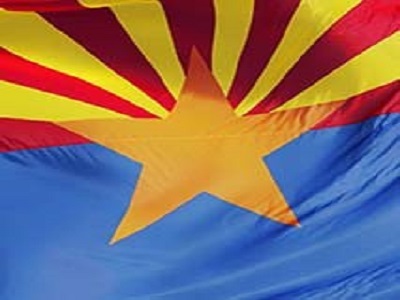 What does Arizona’s flag mean? In 1910, Colonel Charles Wilfred Harris took up the responsibility to create a flag for the Arizona National Guard’s rifle team, which would become the state flag as we know it seven years later. Colonel Harris designed the red and gold stripes to look like a sunset because Arizona is a western state. Those colors were also carried by Coronado’s Expedition of 1540, a group of Spanish conquistadors looking for the fabled seven cities of gold in the Arizona area.
In a similar fashion to the flag of the United States, the 13 red and gold rays represent the original 13 colonies, and the blue is the identical shade known as “liberty blue.” The large copper star showcases Arizona as the largest copper producer in the United States. The flag’s design is so popular that it was honored as one of the “ten best flags on the continent” by the North American Vexillological Association in 2001.