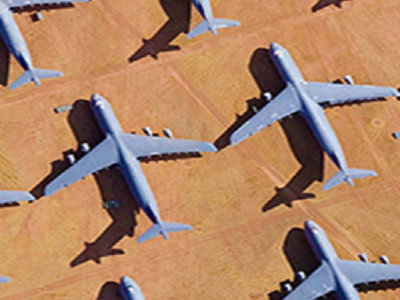 When airplanes are removed from service, either temporarily or permanently, they typically end up at an airplane boneyard, and Arizona has one of the largest. Located in Tucson, at Davis-Monthan Air Force Base, the boneyard features both commercial and military aircraft that were decommissioned from service due to wear out and economic changes in the industry.
The boneyard serves several functions: The aerospace grounds act as a storage unit, which are conducive to preservation, providing spare parts, maintenance reasons and scrapping. The boneyard takes care of almost 4,000 aircraft, making it the largest aircraft storage and preservation facility in the world. Its location was chosen due to the region's arid climate, which makes it an ideal place for long-term storage, and low humidity, so the air does not corrode the metal.
The boneyard also has ties to Hollywood and famous aircraft of the past. Popular movies have been filmed there, including "Transformers: Revenge of the Fallen." Notable aircraft can also be found periodically before being transferred to a museum. For example, "Enola Gay", the historic WWII aircraft, presided at the boneyard before its transfer.
The boneyard is not currently open to the public due to the pandemic, but in the future, they offer a bus tour that is conducted by the Pima Air and Space Museum (pimaair.org). Visit their website to learn more about planning your future visit to this fascinating location. Or, for something closer to home, you can check out the Commemorative Air Force Museum in Mesa (azcaf.org).